I don’t remember how old I was when I first read an abridged version of John Bunyan’s Christian allegory, The Pilgrim’s Progress. It’s a great book, and the abridged version (which I’ve unfortunately misplaced at some point) had great illustrations and was very approachable when I was a boy.

John Bunyan lived in England during the 17th century. He witnessed civil war, plague, and he experienced religious persecution. He wrote the first part of The Pilgrim’s Progress while in prison for not following the Church of England.

The Pilgrim’s Progress has a particularly inspiring passage about courage. It’s when the protagonist, Christian, faces off against evil in the form of Apollyon.

But now in this Valley of Humiliation, poor Christian was hard put to it; for he had gone but a little Way, before he espied a foul Fiend coming over the field to meet him: His name is Apollyon. Then did Christian begin to be afraid, and to cast in his mind whether to go back or to stand his ground. But he considered again, that he had no Armour for his back, and therefore thought that to turn the back to him might give him greater advantage, with ease to pierce him with his Darts; therefore he resolved to venture, and stand his ground: For, thought he, had I no more in Mine Eye than the saving of my life, ‘twould be the best way to stand.

Apol. Then Apollyon broke out into a grievous Rage, saying, I am an Enemy to this Prince; I hate his Person, his Laws, and People: I am come out on purpose to withstand thee.

Chr. Apollyon, beware what you do; for I am in the King’s highway, the Way of Holiness; therefore take heed to yourself.

Apol. Then Apollyon straddled quite over the whole breadth of the Way, and said, I am void of Fear in this matter; prepare thyself to die; for I swear by my infernal Den, That though shalt go no further: Here will I spill thy Soul!

And with that he threw a flaming Dart at his breast; but Christian had a Shield in his hand, with which he caught it, and so prevented the danger of that.

Then did Christian draw; for he saw it was time to bestir him; and Apollyon as fast made at him, throwing Darts as thick as hail; by the which, notwithstanding all that Christian could do to avoid it, Apollyon wounded him in his head, his hand, and foot.

Christian continued to fight for over half a day. Near the end of this great struggle, he lost his sword. Finally, by God’s grace Christian caught his sword, and struck against Apollyon right as Apollyon was readying a fatal blow. Apollyon was beaten and he fled with his dragon wings.

I don’t know about you, but that gets my heart racing. Christian’s courage is a great example to us, and I pray that I’ll have the same courage when I am confronted by such an evil. 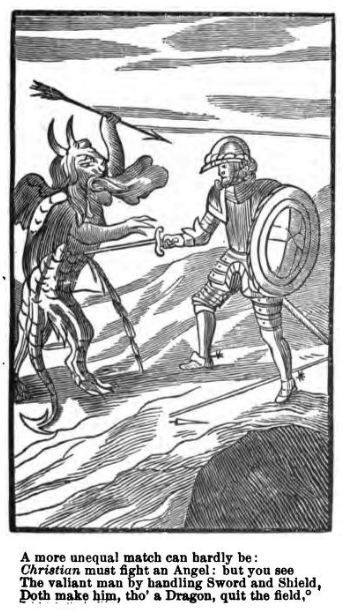